According to the results of the Competition for Socially Significant Projects of the CIS, a team of students of the Russian-Armenian University in the field of "Philology" became the winner in the nomination "Russian Language".

According to the results of the Competition for Socially Significant Projects of the CIS, a team of students of the Russian-Armenian University in the field of "Philology" became the winner in the nomination "Russian Language". The winners were awarded on April 27 as part of the work of the philological section of the RAU Student annual scientific conference.

The team of the Russian-Armenian University headed by the 3rd year student Inga Karapetyan presented the project "Word and Image". As part of this project, initiated by the RAU Department of Russian and World Literature and Culture, students promote great works of literature on social networks using innovative presentation methods and original videos.

"The idea of visually representing and reviving a word through an image is not new: we know many examples of film adaptations of literary works, literary texts, and 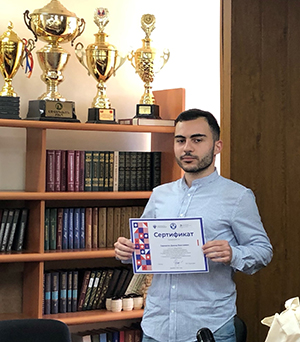 theatrical performances.The uniqueness of our project is that we present all the literary works that we go through no longer in the form of schematic presentations, but in the form of small video clips in some specific cases, not only collected, but also completed by us, in the form of complex editing and all kinds of  special effects, thanks to a variety of programs that provide these opportunities, - shared Inga Karapetyan. - Each of us enters into a healthy competition, forcing us to use more complex ways of solving the task set before us to convey a literary word, reviving it in visual movement".

According to Inga's words, such approach motivates to find new opportunities of literature presenting in a contemporary key, combining both classical approach and postmodern interpretation, involving more and more participants due to the fact that in the project, presented by RAU team everyone can go beyond the strictly  regulated rules and suggest their own “reading” of this or that works: “Thus, for instance, there are very interestingly presented materials on Greek myths, as private messages on Instagram space of ancient Greek gods or discussions on this or that literature works (based on works of Oscar Wilde, Franz Kafka, and others), presented in the format of talks show”.

Some projects, in fact, present the visualization of independent scientific literature and literature-psychological analysis- visual alternative of scientific report with animation presentation.  Besides, “The word and the image” always responds to the significant dates, connected to Russian and World literature (in the past, anniversaries: F. Dostoevsky, Ch. Baudelaire, M. Tsvetaeva, and others).

“The significance of the project, initially initiated by our Teacher, Inspirer, and Tutor in various literature projects, is also that we master the sphere not only philological, but also contemporary technologies, connected to the creation  of videos and movies, which opens before the students of RAU alternative opportunities,- Inga added.- And the victory on the contest of socially significant projects of national-Russian universities is not only the victory of our small team, but each member of our group, The Creator of the alternative “movie universe”- “The word and the image”. For this and for the opportunity to open, gain wings and make impossible possible thanks to our dear Russian-Armenian University”.

It should be noted that the Contest of socially significant projects of CIS was held by the Institute of Pushkin with support of the Ministry of Science and Higher Education of Russian Federation under the aegis of Basic organization of states-participants of CIS on the Russian language teaching. 45 projects participated there in nominations of “The Russian Language”, “Russian education and culture”, “Historical, cultural, scientific, educational, and economic interconnection between states”. The winners of the contest in other nominations also became participants from Grodno, Kyrgyzstan, Belarus, and Tajikistan.