During four days more than 160 reports were presented, covering a wide range of topical issues in various fields of science.

As RAU Vice-Rector for Science, Doctor of Philosophical Sciences, Professor Pargev Avetisyan emphasized, the main locomotive of the research of the university is the scientific research of students and undergraduates. 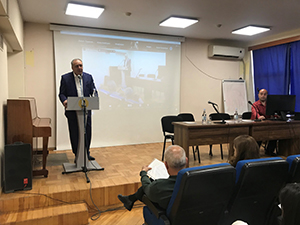 Within the frames of I plenary meeting following students of RAU presented their reports: A. Gasparyan (“Ethnic composition and geographical coverage of Caucasian Albania”), G. Khachatryan ("Phylogenetic Analysis of Sars-CoV-2 LIneages in Armenia"), E. Karapetyan (“Chinese approach of instilling the technologies of artificial intelligence”), I. Manukyan ("Problem of the analysis of regional cluster models and their transition to innovation ecosystems"), and K. Avetisyan (“Finding of interlanguage text borrowings in low-resource languages”).

It should be noted that all presented scientific works were initially heard and approved by corresponding departments, certified by the heads of the department and scientific supervisors. As a result of the conference an online collection of scientific works will be published. The most significant reports of the students, recommended by the chairmen of the sections will be included in the collection.
Translated by Sona Oganyan & Inessa Sharko
(Master's Program in Translation & Interpretation)